I still remember asking my mom why Santa Claus didn’t visit our homes. I don’t remember her exact reply, but rather the thought of this cool man delivering presents to everyone but Jewish kids. SO unfair that the team of reindeer carrying the best toys would pass over the Jewish homes. This was NOT the Passover of matzo balls. 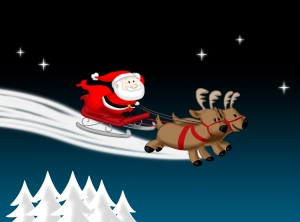 My five year old has already noticed how fun Santa Claus and Christmas are. Recently, he asked me if we could celebrate Christmas. When I tried to explain to him that Christmas is about the birth of the son of G*d, and that we as Jews don’t believe that G*d had a son, he said, “I understand that we are Jewish.  I just want presents.”

I asked our preschool director, Fern Eisenberg, who suggested I focus on what the children DO have instead of what they don’t. For instance, my kids’ favorite holiday is Purim. It’s a second Halloween for them; they dress up in costumes, make hamantaschen and deliver mishloach manot boxes. Talking about Purim often distracts them, but as they’ve gotten older, the response becomes, “But why can’t we have Purim AND Christmas?”

Fern wrote in her newsletter, “celebrating Christmas deprives the children of the opportunity of feeling proud of their own heritage.”  She recommended instead to empathize with their feelings:  “Sometimes it’s not easy to be Jewish during Christmas, when it seems that so many people are celebrating Christmas. You wish you could have a Christmas tree and decorate it and get up on Christmas morning and find presents under the tree. But Christmas is a Christian holiday. We are Jewish.”

Next, I asked our rabbi, Elana Zeliny, also of Congregation Beth Sholom, who reminded me that “both holidays are about bringing light into darkness and about celebrating with your family.” She suggested that I tell the children that Santa is the way that Christian families celebrate their holiday, just as Jewish people celebrate our holidays with fun traditions.

I tried to think about how I would handle a question about Jesus. I’d say that Christians believe that Jesus was the son of G*d, but that Jews believe that G*d is a spirit, and that only people have children. I try to be respectful of other religions, as I’d want my child to be. Telling my kid that Santa is fake could ruin the fun for other children, and an admonishment not to tell would be irresistible. So instead, I’m telling my children that we don’t believe in Santa Claus, but that other families do.

This article was originally published on the Hint Mama blog.