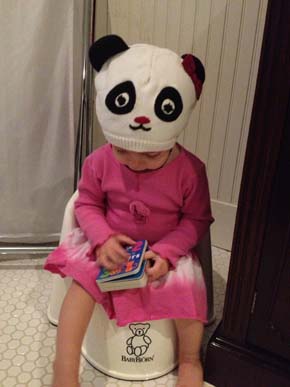 Potty training, like everything, has turned out to be quite individual, adding to my assessment on parenting advice. If someone tells you their method works for every child, be skeptical.

My first started potty training at 25 months, based on my initiative. We had done some early potty sitting at 15 months, but that fell by the wayside during a move and renovation.  So basically, we started cold.  I followed the bare bottomed method for three days. We put potties everywhere. He was willing to sit on it as long as it wasn’t in the bathroom but had a problem opening his sphincters on the potty. The first day, he peed on the floor all day, but finally did a tiny pee in the potty.  We cheered, and he carried it to the toilet to dump it out. The second day was about half and half. The third day, he was about 75/25.  He pooped best either sitting in front of Dora (a special potty treat) or playing with toys.

Next, we transitioned into pants with no underpants.  Every time he tried underpants, he instantly peed in them. According to some sources online, underpants feel like a diaper to many children. We had a hard time when leaving the home because my son required thirty minutes to pee or poop on the potty. By six weeks, he was comfortable on the go, usually in a smaller potty that I carried in a grocery store bag. We transitioned into underpants after two months, with just the occasional accident.

With my second, I started pre-potty training at 12 months to see if I could make the transition more smooth than an abrupt three day plan. We began with sitting on the potty once a day, when she usually pooped, so that she was often successful.  Over time, we added potty times, but still kept her in her diaper.  Occasionally, we let her run around without a diaper or pants for an hour or two.  Early on, she chose to use the toilet because she wanted to be like her big brother.

At 19 months, she decided she didn’t want to wear diapers any more.  The first day, I tried pants free, and the house was a mess.  The second day, I tried underpants, with the hope that the mess would stay contained and that she would feel it more directly.  Bingo.  After a few messes, she was using the potty on her own.  Within a month, she rarely had poop accidents and had pee accidents about once a day.  I figure that’s no big deal vs. diapers in a child so young.

The first 5 months, I put my son on a schedule as suggested in Diaper Free Before Three, in the potty every two hours, plus before and after waking or eating.  At 2.5 years old he wanted to self initiate as the Terrible Two’s kicked in. He had many accidents and couldn’t recognize the feeling of when he needed to pee.  In retrospect, the schedule had made him rely upon me to tell him when to go.

With my daughter, I wanted to avoid that mistake, so I’ve let her self initiate. While she’s had more accidents early on, she’s learned how to go on her own.  She isn’t fully verbal yet, so she either pulls down her pants or walks to the bathroom when she needs to go.

We are now in the middle of a regression during summer vacation — at the beach, far from the bathroom, and a questionable choice to use pullups on the airplane. My daughter is only 22 months, so I plan to stay the course when we return to San Francisco. Stay tuned to hear how it goes upon our return.

My son also had a regression this past year, mini-accidents, not a full pee. When I described his mornings, sitting on the potty for 15 minutes to poop, the pediatrician suggested that he was constipated.  Constipation can make it difficult to sense the urgency to pee.  We put him on flax seed oil twice a day, and the accidents mostly disappeared.

What have your potty training experiences been?

Resources
Diaper-Free Before 3: The Healthier Way to Toilet Train and Help Your Child Out of Diapers Sooner by Jill M. Lekovic

Kalencom 2-in-1 Potette Plus Red