Skip to content
Home » Activities-Play » Finding a Middle Ground: Six Ways to Give Our Children Room to Grow without Undue Risk

As I watch my two year old race to the play structure and try to climb a tricky bridge, something she’s never done before, my five year old warns me. “Lili can’t do that. Mama!  Quick!” I wonder, should I cover her? Do I give her the space to try challenge herself? Will she be OK? 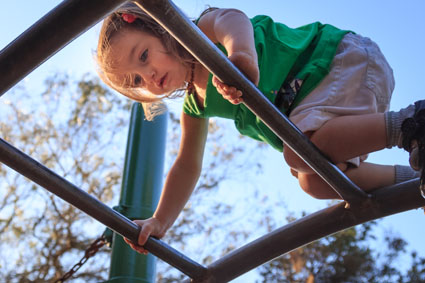 Parenting can often seem like a battle among philosophies. Do you cloth diaper? Compost diaper? Potty train early? Potty train late? Purees vs. baby led weaning? I’ve come to the conclusion that every philosophy has value to add, and that the best philosophy is no philosophy, but a middle ground taking the best from everyone.

I love the idea of my kids growing their responsibilities, learning how to be themselves without my constant intervention. On the other hand, I worry about the repercussions. Could my child be hurt with that knife? Will he spill an entire gallon of milk trying to refill his cup? Worse fears emerge of broken bones, kidnapping, terrible things. Unlike some of our infant choices, these later choices can have serious consequences.

On the other hand, I watch a preschool parent do the puzzle for her child, who struggles for maybe a second before the mother shows him the correct angle. Will he learn for himself if not left to experiment. I watch a parent on the playground hold her 2 year old as she slides on the baby slide, one that most 1 year olds can handle on their own. And I ask myself, does this child have room to grow?

Looking for the Middle Ground

Hence, the title of this blog article, how to find the middle ground. How do we give our children the space to learn without accepting undue risk?

One thought on “Finding a Middle Ground: Six Ways to Give Our Children Room to Grow without Undue Risk”