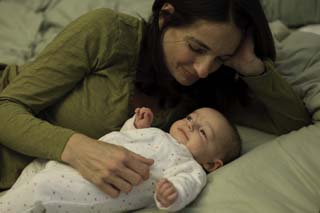 Sleep is a personal and charged topic. Who doesn’t need more sleep? You’d be hard pressed to find a new parent who *isn’t* tired. I’m here to tell you that it’s OK to want more sleep. While newborns are impossible to “sleep train,” at some point you’ll have an older baby, and you’ll realize that you *need* more sleep. Don’t feel guilty. Sleep is a basic, human need, for both you and your child. Without sleep, you can’t be the parent you need to be.

Child One:  No Crying Alone

When my first child arrived, I “knew” in my heart that I couldn’t let him cry. Luckily, he was an excellent sleeper. As a newborn, I had to wake him to feed because of his low weight. It was therefore a huge relief when his pediatrician said that he could now sleep as much as he wanted. Despite my purchase of a bassinet and crib, he slept best with me. Hours. When he was still an infant, I nonetheless was tired and turned to the no cry books.  Simple acts helped a ton. After feeding, I’d roll onto my side so that he faced my back, and he would wake less often to drink.  When he was 9 months old, I night weaned his middle of the night feed by letting him cry while I was in the bed with him (facing the other way). The first night, he cried for 5 minutes while hitting my back. He never asked for a night feed again except when sick or in pain. Of the books below, he responded best to the methods in Sears, though I didn’t try the cry it out books.

On the other hand, my son never napped well unless in motion. He napped in his side-to-side swing until he was climbing (or diving) out of it. After that, I would start him in the car or stroller, and leave him in our semi-private garage to nap. I bought a video monitor so that I could monitor him in our apartment.

When my second child arrived, I thought I knew it all about sleep. Smugly, I took out my Sears and Pantley. Zero help. Exhausted with two children, I put my newborn into the swing.  She only slept in the swing, not next to me, not in her bassinet or crib. I tried all the no cry tricks — a heating pad to preheat the bassinet (removed before the baby went in) and more — but none worked.

At three months, I decided to wean her off the swing because I worried that she would get attached to it, given the end of the “fourth trimester”. In this, Pantley was extremely helpful. At naptime, I would rock her almost to sleep while breastfeeding and then gently put her down into her crib, with music playing. Slowly, I reduced the rocking until she went down easily after nursing. If she fell asleep, I kissed her gently to wake her before putting her down.

Night times were similar to naps, except she slept in the bassinet until 6 months, when I switched her to her crib in her brother’s room. I’d wait until her brother was asleep, and then put the baby down. My rationale? Her brother is a great sleeper, but he needs quiet to initially fall asleep. Even now, at 4.75 and 1.75 years old, if I put my daughter and son to bed at the same time, they will chatter together and stay up all hours.

Night weaning was much more difficult with my daughter. She has a strong personality, loves nursing and did not willingly drop her night feeds. I started with Sears, moved to Pantley, then Ferber. I read many sleep books. My lesson?  Not all methods work on all people.

I tried to feed less and less each night, and it worked until we got to about 8 minutes, when she screamed if I stopped nursing. Finally, at nearly 12 months old, desperation led me to full on crying it out. The first time, I dropped the feed by holding her while she cried. It took a week of an hour of crying each night, and then another week to drop the cuddle. For the second and last feed, I let her cry alone because the cuddle was dragging out the process. The good news? From 15 months onward, she started sleeping 11 hours straight, bedtimes became easy, and when she does wake crying, it’s clear that something is wrong, like an ear infection or teething pain. I feel good about trying a gentler method first, but learned not to judge other parents.