Cosleeping gets old to mama, not so to toddler

My first child co-slept with me on and off until he was a little over 2 yrs old. During my first trimester with #2, he started to kick in his sleep.  And to want to fall asleep with my arm under his neck. Or to sleep on top of me, face down.

I realized that he would never go from the freedom of my bed to a crib, so I converted his nearly brand new crib to a toddler bed. The first night, we started with a renewed emphasis on bedtime routine.  Bath, PJ’s, 3 books and 3 songs. I wish I could say that it all went perfectly . . . NOT. He cried, and I gave up and let him sleep with me. 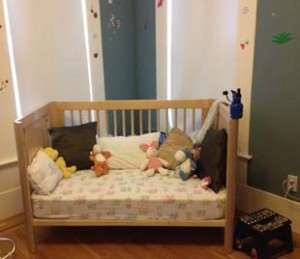 My mom suggested offering him new bedding of his choice if he stayed in his bed for three nights. We looked together online, and he chose a Curious George set. (Did I mention that she wanted to buy it?  So, I wasn’t sure if it was an excuse to buy her grandson a gift or a genuine idea, but figured that it was worth trying.)

That night, we repeated the bedtime routine, and also talked about his big boy bedding. I climbed into the toddler bed with him to read the story (and dented the supports).  We went back and forth a few times, with moderate but not awful tears. When he followed me out the door, I threatened to close the door, but didn’t have the heart to leave it closed for more than five minutes. I later read in Ferber the suggestion to use a gate instead so that children don’t feel trapped, and to add a second gate on top of the first if they can climb over.

The good news. Within a week, he understood that he needed to stay in bed to keep the door/gate open. He LOVED his new bedding and liked redecorating his room. We ordered bunk beds and moved him gradually (one piece at a time) into a new room, so that he was all set months before his sister arrived. Any time he refused to stay in bed, I only had to threaten to put a childproof device on the door knob, and he’d hop back into bed.  . . . Until his sister arrived.

As he turned into a threenager, my son became a big brother. Bedtime and preschool drop offs turned him into a clingy mess. I tried various discipline methods and extra cuddles, but even my mom started to lose patience with her jack-in-the-box grandson. I finally created a reward chart, including staying in bed, brushing teeth and keeping underpants dry, copying and pasting images from his real life items into a presentation. Check out this sample reward chart to see if it might be of help to you.

Enter the second child, who wants to do everything her brother does. Climb out of her bed. Sleep in the bunk beds. Climb into his top bunk. Her brother wanted her to sleep underneath on the bottom bunk, and encouraged her. Fortunately, she isn’t tall and was unable to climb out of her crib, but on vacation, she climbed out of the travel crib.

Crud. No time to make special preparations. We moved my son to a blow up twin, and gave her the blow up toddler bed with some bedding my mom had bought her to keep at her house. The first night, she popped up several times before going to sleep, but really not that bad. When we returned home, the same thing. Sometimes, I need to walk her back to bed two or three times, but usually she stays in bed. Occasionally, she sneaks into my bed when I’m downstairs after bedtime. I carry her back to her own while she’s sleeping.

For the first few weeks, I left the crib assembled and offered her two choices, the big kid bottom bunk or the crib. She always chose the big kid bed, and the empty threat helped. This weekend, we took one side off of the crib and turned it into a reading nook for the kids.

Why was this so, relatively, easy? I can only guess that her brother sharing a room keeps her there. She’s not alone, and while her first choice is sleeping with mama, her second choice is having her big brother in the room.